Eng Arab
© Rekan Group 2018. All Rights Reseverd
About Us

Group Rekan for reconstruction and investment is a group of leading companies in the field of investment and construction, telecommunications and infrastructure, in addition to the total of businesses that have a range of commercial agencies. Total also has projects in operation and implementation of distributed to the governorates of Erbil, Dohuk and Sulaymaniyah.


Chairing the Group Rekan for reconstruction and investment, Engineer Ahmed Ali Aziz Rikany, also heads the Kurdistan Contractors Association. During the past ten years the company has linked the group to the implementation of projects of the highest levels of importance on the hand of the donor of the project and hand the service to be provided by the projects.


The group has been implemented and operated a group of projects represented by the huge projects of recreation and tourism, marketing and housing as well as the implementation of telecommunications projects and infrastructure, schools, and some of the electrical projects

The group owns the first commercial project in Erbil, a New City Center shopping the modern New City, which was implementation and operation in 2006. This is where the project of pilot projects in terms of quality and operation have been to rely on cadres of foreign and local specialist in the field of shopping. The project was implemented on an area of 24 000 m 2, and contains the center of a complex of motels perpetrator of the highest quality, and building Bowling fuel station and supermarket sections for the sale of electronic devices from global Origin Cafeterias internal and yard games for children and a restaurant on the third floor. It also has the first screen New City external LED screen is the biggest screen in Iraq, where it was installed in 2006.

Also prepared a series of research projects and designs for a huge section of a project under implementation Mika Mall (which is a shopping mall built on an area of 10000 m 2 of the four floors and a basement in Erbil) is hoped to be completed during the fourth quarter of 2010. Greenland and the project (to build 500 housing units an area of 1000 m2 on an area of 500 Acres of land in Erbil by Resort Salah El-Din) is supposed to end the first phase during the first quarter of 2010 and the rest of the stages during the years 2011-2012. Also, some projects will end within two years of implementation with some future projects. We have also built a series of entertainment projects, hotels and hospitals in Erbil and Sulaymaniyah. The costs were allocated to the construction of this project in addition to projects under construction limits ($ 400 million). 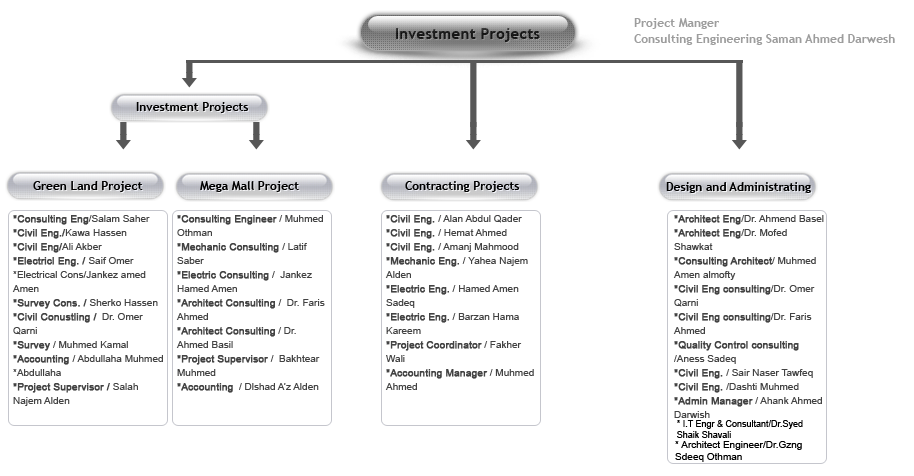 Companies of Rekan Group for Reconstruction and Investment

Rekan Company for General Contracting was established in year 1999 as first class.

Ararat Company for Contracting was established in year 2002 as Third class.

Sary Bland Company for contracting was established in year 2004 as fifth class.

Razan Company for Contracting and General Trade was established in 1997 as First Class.

Setaff Company for contracting was established in year 2004 as first class and work include the Engineering Group for Reconstruction and Investment.

Golfin Company was established in year 2008 Is a company that owns a number of agencies, commercial products such as cheeses Puk and Lurpak butter and tuna Chilanp Store products and canned food. This company also owns a number of private vehicles for the distribution of these food products

Bara Nevsta Company for Insurance was established in year 2008. Is a trading company provides feasibility studies and how to invest in stock markets and the metals gold and banking services and legal advice and consulting in the service of health insurance and comprehensive insurance.

Holykurd for shopping and advertising was established in year 2005. Is a company specializing in advertising and marketing commercial and television production.

New City Commercial Corporation was established in year 2006 . Is a company that owns a marketing and entertainment complex integrated in the center of Erbil, an area of 24,000 square meters, containing a complex of motels, bowling games and the foreign hypermarket area of 8000 square meters and a Turkish restaurant and cafeterias.

Mega Mall Company was established in year 2009. Is a company that has a complex shopping mall alleged area of 18,500 square meters, is composed of four floors and a basement with a total area 35,000 square meters and contains shops number 350, the entertainment complex includes a Cinema Complex and Game Places to play and Skating, a supermarket, restaurants and Cafeterias, commercial offices and consulting.

Green Land Company was established in year 2009. Is a company that owns the land area of 500 acres to build 500 high-quality Villas ranging in size from 600 to 2500 square meters and is located on Crescent is located on the road to Erbil summer resort of Salah Aladdin. It also contains the service projects and entertainment.

Power Man company was established in year 2004. Is a specialist company in electricity contracting and install huge electrical stations .

Is a company that has experience of more than 25 years in the field of elevators installed in Iraq.

Aira Telecom company was established in year 2006.Is a company specializing in communications and installation of networks and information technology.

Mhsram company was established in year 2004. Is a company that owns a large agency in granite and Iranian porcelain originator.

Refinery was Established in year 2010. Is a refinery for crude oil in the province of Arbil, a production capacity of 2000 barrels per day